Of His Blood and Eternity 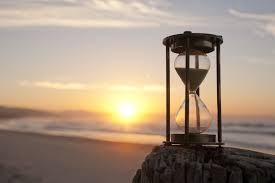 
Humans today tend to think in terms of linear history. Events of history appear to have a beginning, a middle (climax or denouement), and an end. However, all events have complex etiologies and some of the forces at work are never recognized by historians.
Linear thinkers tend to view the progression of history as either positive and upward or negative and downward. The obsession of some Fundamentalists with the End Times is an example. They speak of moral corruption, crime, famines, earthquakes, pandemics, wars and rumors of wars as absolute proof that we are living in the last days and that Jesus Christ's return is near.
The secular positivists speak instead of the progress made through technology, medicine, and the sciences. They grow excited about the possibility that humans could live forever (transhumanism) or that human settlements on other planets could insure an eternity for the species. They embrace the concept of evolutionary progress over time.

Spiral found on ancient petroglyphs in what is today Sudan.
In the ancient world it was common to think of time as cyclical and to equate the various cycles to patterns such as the seasons or the location of stars and constellations in the night sky. The cyclical view of time and the Fundamentalist view of time were challenged and eclipsed by the evolutionary mindset of the Twentieth Century.
That mindset became a template through which data was interpreted. In the study of religion, it was assumed that primitive humans were superstitious, animistic, and polytheists. This equates primitive to a brutish nature. However, this evolutionary conception of religion simply does not stand up when closely evaluated. Rudolf Otto wrote a book about this: The Idea of the Holy (1923). He believed that early humans responded to the "numinous" out of emotion rather than reason. That does not seem to be true when we look at all the data. Early humans were great observers of patterns in Nature, and they drew rational conclusions based on those observations. That is why Paul states that all are without excuse in Romans 1:20.
In reality, time is a great mystery. We cannot apply the term "time" to the eternal because the eternal is timeless. "Eternal” means outside of time. Time and space were created for humanity because humble clay needs fixed boundaries or external pressures to keep its shape.
The Triune God is not bound by time and space. The co-eternal Son is said to fill all things, seen and unseen. This means that the Blood of Jesus Messiah establishes a timeless covering for those who are "in Christ" or who "put on" Christ. Those living before His Incarnation and those living after His Incarnation are covered by the same Blood if they find communion with the Creator who seeks to be the God and Father of all.
Paul uses the term "pleroma" in his epistles when speaking of Christ filling all things. For Paul, the pleroma is the manifestation of the benefits of Jesus’ timeless blood. The Apostle Paul refers to the blood of Jesus no less than twelve times in his writings. Because God makes peace with us through the Blood of the Cross, he urges “Take every care to preserve the unity of the Spirit by the peace that binds you together” (Ephesians. 4:3).
Paul explains that Jesus Christ is the fullness (“pleroma” in Greek) of all things in heaven and on earth, both invisible and visible. The term “pleroma” was used among the Gnostics to describe the metaphysical unity of all things, but Paul uses the term to speak about how the fullness of the Godhead dwells in Christ in bodily form (Col. 2:9).
Paul’s use of the term pleroma, as well the appearance of this term in other First Century writings, suggests that the concept was widely circulating in apostolic times. Against the Gnostics, the biblical writers used it to explain that the mystical Body of Christ fills heaven and earth; that He is sovereign over all and in all. For the Gnostics, the pleroma is vague and undifferentiated, but for Paul the pleroma is about the Son of God and the benefits of the blood of Jesus. Paul hoped to prevent the early Christians from wandering from the Blood of Jesus that brings forgiveness and eternal life.
The Cross is central for Paul, but its benefits are not bound by time. Doubtless, the reader will have heard about the cross as an especially excruciating form of execution invented by the Romans. That is true. However, the efficacy of the Blood of Jesus does not rely on the existence of the Roman empire.
Reality is the deposit of the fullness of all things hidden and revealed in Christ. Paul wants his converts to understand that they are “entrusted with the mysteries of God” so that they may faithfully proclaim the Gospel; so that hearers “may know the mystery of God, namely, Christ” (I Cor. 4:1, Eph. 3:9; Col. 2:2). The pleromic Blood of which Paul speaks constitutes a single reality. One is either in Christ or not in Christ; connected to the Life-giving eternal reality or not connected. Abraham was connected. His Faith was not of a different dispensation because Paul reminds the Gentile believers that they are grafted into the faith of Abraham (Rom. 11:17).

Paul articulated his understanding of the pleroma as early as his second missionary journey when he preached to the Athenians that, “in Him [Jesus Christ] we live and move and have our being.” (Acts 17:28) However, Paul’s thoughts on this developed further as he continued to reflect on the Hebrew Scriptures, prayed and fasted, and received greater illumination by Christ. We find the fullest expression of the pleroma in his latter writings, especially in Romans and in Ephesians.

In Him we have redemption through His blood, the forgiveness of sins, according to the riches of His grace which He made to abound toward us in all wisdom and prudence, having made known to us the mystery of His will, according to His good pleasure which He purposed in Himself, that in the dispensation of the fullness of the times, He might gather together in one all things in Christ, both which are in heaven and which are on earth. (Ephesians 1:7-10)

Paul's confession of the pleromic Blood of Christ informs his understanding of the Body of Christ. He writes: “There is one Body, one Spirit, just as one hope is the goal of your calling by God. There is one Lord, one Faith, one baptism, and one God and Father of all, over all, through all and within all” (Eph. 4:4-5).Lest we presume that the pleromic understanding of the Blood of Jesus is an invention of St. Paul, we should consider also these words from St. John:

Who can overcome the world but the one who believes that Jesus is the Son of God? He it is who came by water and blood, Jesus Christ, not with water alone but with water and blood, and it is the Spirit that bears witness, for the Spirit is Truth. So there are three witnesses, the Spirit, water and blood, and the three of them coincide. (I John 5:5-8)
Related reading: Paul's Application of Greek Philosophy; The Pleromic Blood and Gnosticism; Theories of Time; Meditation on the Holy Cross; The Oldest Known Religion; On Blood and the Impulse to Immortality; Three Views of Time and Eternity; The Timeless Mystery of God; Adam Green: The Past and Futures of the Philosophy of Religion
Posted by Alice C. Linsley at 2:47 PM