The Timeless Mystery of God 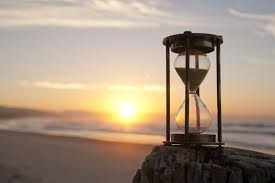 Human existence entails the perception of space and time, but our sense of place is generally more acute than our sense of time. We speak of time as something that "passes" and we yet we have no immediate awareness of its passing. C.S. Lewis wrote of this experience:


"We are so little reconciled to time that we are even astonished at it. 'How he's grown!' we exclaim, 'How time flies!' It's as strange as if a fish were repeatedly surprised at the wetness of water. And that would be strange indeed; unless of course, the fish were destined to become, one day, a land animal." (Reflections on the Psalms. Harcourt, Chapter 12)


Aristotle viewed time as something external which has duration and numerical value. Neo-Platonists instead spoke of time as being continuous, as the soul is eternal and imperishable. This conception is similar to the Platonic ascent of the soul in the Symposium and the Phaedrus.


"There are no ordinary people. You have never talked to a mere mortal. Nations, cultures, arts, civilizations - these are mortal, and their life is to ours as the life of a gnat. But it is immortals whom we joke with, work with, marry, snub, and exploit - immortal horrors or everlasting splendors.” (The Weight of Glory)


In The Myth of the Eternal Return, Mircea Eliade writes that belief in cyclical time was “discernibly present in the earliest pre-Socratic speculations. Anaximander knows that all things are born and return to the apeiron. Empodocles conceives of the alternative supremacy of the two opposing principles philia [love] and neikos [strife] as explaining the eternal creations and destructions of the cosmos…The eternal conflagration is, as we have seen, also accepted by Heraclitus. As to the eternal return – the periodic resumption, by all beings, of their former lives – this is one of the few dogmas of which we know with some certainty that they formed a part of the primitive Pythagoreanism.”

Does the soul have an existence autonomous from time and space? If so, are we to imagine the transmigration of the soul, as did Plato? Or are we to imagine a bodiless soul or spirit delivered from the cycle of reincarnation to a non-material state? The Christian hopes for bodily resurrection made possible by connection to the Resurrected One, the Messiah, the "first born from the dead." He is the eternal King who grants immortality to those He leads to the Father.


We may reason that that which predates time is not bound by time, and if we do so, we must apply this to the very laws of physics. And if we do that, we must entertain the likelihood that there is a fixed quality to those laws. The Israeli scientist Gerald Schroeder takes this position in his book The Hidden Face of God: Science Reveals the Ultimate Truth. Schroeder writes:


“The further philosophical problem of there having been a beginning arises with the idea that the beginning of our universe marks the beginning of time, space, and matter. Before our universe came into being, there is every scientific indication that time did not exist. Whatever brought the universe into existence must of course predate the universe, which in turn means that whatever brought the universe into existence must predate time. That which predates time is not bound by time. Not inside of time. In other words, it is eternal. If the laws of physics, or at least some aspect of the laws of physics, did the job of creation, those laws by necessity are eternal.”


The Creator is the eternal and immutable God. We may reason that physical laws reflect the Creator, but the best physicists admit that there are many unsolved mysteries in physics. The mysteries themselves provide evidence of the timeless reality of God.


Related reading: Time and Eternity; Theories of Change and Constancy; The Metaphysics of Time Perception; The Story of Ontology; Better a Philosopher and an Orator; Gain a Heart of Wisdom; Eighteen Unsolved Mysteries in Physics; Tim Maudlin on Time

Email ThisBlogThis!Share to TwitterShare to FacebookShare to Pinterest
Labels: being, eternity, time