Another Look at Michel Foucault 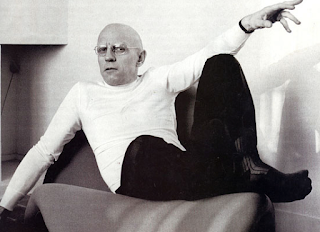 Recently, I read Michel Foucault's The Order of Things (1966) at the same time I was reading Loren Eiseley's The Immense Journey (1959). The contrast of Foucault's pessimism and Eiseley's optimism concerning humanity is striking. Foucault's background was in psychology and Eiseley's was in anthropology. Both disciplines explore what it is to be human, and yet these two thinkers draw very different conclusions.

I admit a bias toward Eiseley because I also have a background in Anthropology (as well as Philosophy). I also admit to favoring Eiseley's pro-capitalism and environmental activism over Foucault's leftist politics and push for the decriminalization in France of "consensual" sexual relations between adults and minors below the age of fifteen.
I prefer Eiseley's agnosticism to Foucault's atheism. Eiseley admits that the universe presents us with mysteries. Foucault rode the "God is Dead" wave with enthusiasm as it promoted his "death of man" and anti-humanist persuasion. He described humanism as "the heaviest heritage that has come down to us from the nineteenth century" and he added, "it's high time we got rid of it." (Horizon, Autumn 1969, p. 36).
I prefer Jacques Derrida's deconstruction in which he concluded that something is at the center; what he designated "transcendental signified.” He spoke of this something as "presence" that is sometimes called God. However, Derrida did not regard God is a being, but rather as a necessary function.
The philosopher Roger Scruton has argued that Foucault was "a sort of passionate heretic" among modern atheists, "trying as it were, to use the numinosity of the irrational to plug the supposed gap left by the absent God."
In his Madness and Civilization (1965) Foucault articulates madness as a function. He writes, "Madness deals not so much with truth and the world, as with man and whatever truth about himself he is able to perceive." (p. 27)
In Madness and Civilization Foucault develops the distance between reason and nonreason and comes across the romantic mystic. He digs in pre-selected ground as an archaeologist to discover how the exchange between madness and reason was silenced. He illustrates historical discontinuity by his division of European thought into disconnected epistemological dispositions, each called an episteme (from the Greek term for knowledge).
Foucault's episteme of the sixteenth century is based on the idea of resemblance. He alludes to the Doctrine of Signatures, the belief that plants resemble the body parts they are intended to treat.
His episteme of the seventeenth century is based on the idea of representation. He recognizes that the thing represented is not the thing itself, noting the distinction between the sign and the thing signed (echoes of Derrida).
Foucault's episteme of the eighteenth century expresses itself in science and analysis, and it is here that he places the invention of Man. He writes, "It is a comfort, however, and a profound relief to think that man is only a recent invention, a figure less than two centuries old, a simple fold in our knowledge, and that he will disappear as soon as our knowledge finds a new form."
As an intellectual contruct that only resembles itself, Man cannot know his/her true essence. Here again, I find a contrast between Eiseley and Foucault. For Foucault, man is but a dream with no absolute ontological essence, and apparently, no future. Based on sometimes obscure references, Foucault postulates that godlike Man has "vaporized to the exact degree that one tracked him into his depths." He thinks that Man will disappear, "like a face of sand on the edge of the sea."
For Eiseley, man is the creature who dreams about the future. His dreams have taken him to the Moon and back. In the Invisible Pyramid, Eiseley writes, "Man would not be man if his dreams did not exceed his grasp..."  He also wrote, "Man is not totally compounded of the nature we profess to understand. Man is always partly of the future, which he possesses a power to shape." (Horizon, July 1960, p. 32)
END
Related reading: The Perversions of M. Foucault; The Etiology of the Cancel Culture; Review: Michel Foucault: "Confessions of the Flesh"
Posted by Alice C. Linsley at 12:29 PM