The Sun and the Sacred 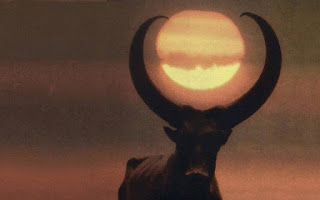 "But for you who revere my name, the sun of righteousness will rise with healing in its rays. And you will go out and frolic like well-fed calves." Malachi 4:2

This is the third in a series on time measurement through the ages. The first essay examines the development and use of the clepsydra, a water clock. This was widely used during the Holocene Wet Period and into late Antiquity. As the climate of the ancient world began to dry out, the clepsammia (sand-glass) came into wider use.

The oldest known device used to measure time involved the Sun. Early humans in Africa tracked the hours of the day by watching the shadow cast by boulders, stacked stones, and sticks. The populations living along the Great Rift Valley and in the Blombos Mountains of Southern Africa used this method millions of years ago. This also was a practice of the Australian Aborigines as early at 10,000 year ago. The sundial is based on this same method of observation.


As the Sun was in the heavens, its movement was of special interest to archaic Man. The Sun was the subject of theological consideration and became the emblem of the Creator. This is why solar imagery pervades many cultures long before the Axial Age.

The sky was very important to archaic peoples and anything that came from the sky was regarded as sacred. This included rays of sunlight and meteroritic iron beads. These were perceived as the Creator's semen/seeds giving life to "mother" Earth.

Obviously, the Creator was perceived as male/father and the source of fertility. It was believed that the divinely appointed ruler would be conceived in his mother's womb by the overshadowing of the Sun. This belief was widely held among the archaic rulers in the Nile Valley, in India, in Mesopotamia, and in Southern Europe. Sargon claimed such a miraculous conception, and according to Luke's Gospel, the Virgin Mary conceived by the overshadowing of the Holy Spirit.


The horns are a pictograph used to designate an appointed ruler among the Biblical Habiru who were devotees of Re, Horus and Hathor. This is why the Y appears in  many Hebrew names: Yaqtan (Joktan); Yishmael (Ishmael); Yishbak; Yitzak (Isaac); Yacob (Jacob); Yosef (Joseph); Yetro (Jethro); Yeshai (Jesse) and Yeshua (Joshua/Jesus). Many horned altars and horned sacred vessels have been found by archaeologists.

It is little wonder that the Sun's movement was used to measure time. The word dial is derived from the Latin word for day, which is dies. Sundials calculate the hour of the day based on the length of the shadow. Just as the Sun does not change its course, so the Good God does not change. This is expressed in James 1:17 - "Every good thing given and every perfect gift is from above, coming down from the Father of lights, with whom there is no variation or shifting shadow."

Among archaic peoples the sacred temporal center was high noon, when there is no shadow. The sacred spatial center was the high place or mountain top, between heaven and earth. The most auspicious time and place to commune with God would be high noon on the mountain top. No wonder there are countless stories of divine encounters of this type: Abraham, Moses, Elijah also Zarathustra on the mountain top addressing the Sun.

Solar eclipses, such as the one that happen on February 5, 3109 BC, were noted by the priest-astronomers at Nekhen. This was an eclipse of long duration (as Nekhen is closer to the equator) and it appears that it began around mid-day. It would have remained dark for several hours. Consider the quandary of the priest-astronomers: when should the stick be moved? Consider the implications for their theology: the sun was the emblem of the Creator Ra and his son Horus. Why were they witholding the light?

Consider the testimonies of Mark and Matthew who report that darkness came over the whole land from noon until 3:00 pm at the time of Christ's crucifixion.


Later the Egyptians and the Babylonians erected large stone obelisks to form the gnomon of a sundial. The obelisks were used also to calculate the longest and shortest day of the year. These ancient obelisks were inscribed with the ruler's various titles and words of praise for both the ruler and the deity he served. Horus was the guardian of the ancient Kushite and Egyptian rulers from as early as 4000 BC. The kings were regarded as the earthly representatives of the Ruler of the universe, the “sons” of God. The earliest known moral code is associated with the law giver Menes who united the peoples of the Upper and Lower Nile shortly after the total solar eclipse of 3109 BC.

A six-sided obelisk has been found in Judah at a 10,000 year shrine settlement in the Judean Shfela. The obelisk is oriented to the rising sun. The architects of the shrine tracked the solar arc. The majority of ancient and prehistoric sacred sites align to meridian cardinal directions and the solar arc.

Aspects of the ancient solar symbolism are found in the Bible, throughout the territories of the R1b rulers such as the Hittites, the Luwian, and the Etruscans. The religious significance of the sun is evident also in historical texts. The Bible designates Abraham as Habiru or Hebrew. The Habiru were a caste of priests who served in the ancient sun temples and shrines, called O-piru. Here the O is a solar pictograph. Psalm 92:2 describes the Lord as “a sun and a shield.”

The Victory Tablet of Amenhotep III describes Horus as “The Good God, Golden [Horus], Shining in the chariot, like the rising of the sun; great in strength, strong in might…” (J.H. Breasted, Ancient Records of Egypt, Part Two, p. 854).

Related reading: Better a Philosopher Than an Orator; The Sun and Celestial Horses; Monuments of the Ancient Kushites; Solar Symbolism of the Proto-Gospel; Ancient African Astronomers; Ancient Wisdom, Science, and Technology; The Urheimat of the Canaanite Y; The Ra-Horus-Hathor Narrative; A Tent for the Sun; The Sun and Moon in Genesis; Gain a Heart of Wisdom