Gain a Heart of Wisdom 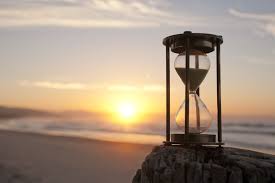 
The clepsammia or sand-glass is an interval timer that depends on the particle flow of sand. Its older counterpart was the clepsydra (Time Thief) which depended on water flow. According to the American Institute of New York, the clepsammia was invented at Alexandria about 150 BC. However, the Greeks were using the sand clock as early as 300 BC.

The sand-glass appears to have come into wide use after much of the ancient world became drier. Earlier, the clepsydra or water-clock was much more common, but there were difficulties with the water flow in the colder climates. Caesar was much aggrieved when he invaded Gaul and found that the water in his clepsydra had frozen.

There are difficulties with the sand-glass also. If moisture penetrated the seal on the glass, the sand clumps. To prevent this, powdered eggshell or lead dust were sometimes added. The problem of moisture was largely overcome by the nineteenth century when glassblowers fused the two bulbs together at the joint, making them airtight.

Sand-glasses generally were used to measure an hour. They were called horologes, from the Greek words hōra, "hour" and legein, "to gather."

In ancient philosophy the term horos referred to the boundaries of an area, or a landmark, or a term. It is likely a reference to the deity Horus who was said to be the fixer of time, current, tides, winds and boundaries. The English words hour, horizon and horoscope share this root. Today the word horoscope connotes astrology, but the original meaning was "observer" [skopos] of the hour. The Indo-European root for year is yeHr-, another reference to Horus. The association of Horus with the horizon is seen in the word Har-ma-khet, meaning "Horus of the Horizon."

The sand-filled hourglass became popular as a personal time device for European nobility in the thirteenth century. Charlemagne (742-814) possessed a 12-hour sand-glass. These timers were used in the kitchens of wealthy households to judge cooking times. Thomas de Stetsham, a ship clerk in the service of King Edward III (1312-1377) ordered 16 sand-filled hourglasses. The sand-glass was used to time the length of the watches on ships.
The hourglass served to time the length of sermons in churches. The device installed in the Royal Chapel in London measured a period of eighteen minutes, the time ordered by Queen Victoria, who apparently did not appreciate long-winded clerics.

Doubtless the hourglass resting near the pulpit served as a congregational reminder of the passage of time and our mortality. Wisdom begins with this humbling truth, as Psalm 90:12 reminds us: "Teach us to number our days, that we may gain a heart of wisdom."

Related reading: Theories of Change and Constancy; Theories of Time; Better a Philosopher Than an Orator