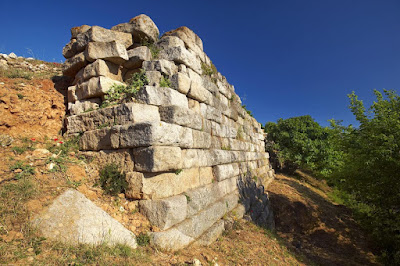 Part of the ancient wall of Stagira

The Greek archaeologist Konstantinos Sismanidis excavated Aristotle's birthplace in northern Greece in the 1990s. He believes that a ruined structure he found may have been the final resting place of Aristotle. Sismanidis admitted that he has no solid evidence, but he quoted medieval references that speak of Aristotle’s remains (ashes or bones?) being interred in his hometown of Stagira.

Stagira is located in central Macedonia, near the eastern coast of the peninsula of Chalkidice. 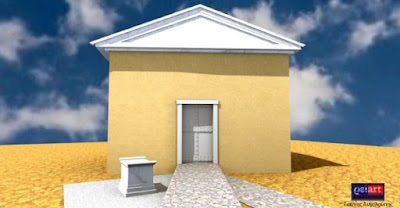 Sismanidis notes that the vault, with its marble floor, dates from classical Hellenistic times, as do the coins and ceramics found there. He envisions it as a stone mausoleum with an altar outside the entrance, as show above. (Read more here.)

Another theory is that Aristotle's ashes were transferred to Stagira from Chalcis on the island of Euboea (Chalkida on Evia) where it is believed he died.

Some sources assume that Aristotle was cremated and that his ashes were brought to Stagira. Others speak of secondary burial, which means that his bones were reburied in Stagira.

In his last years, Aristotle had a relationship with his concubine Herpyllis, who bore him Nicomachus, the son for whom his great treatise on Ethics is named.

In his will, Aristotle made provisions for Herpyllis, and directed that Pythias' bones be moved to his grave. If that happened, it can be assumed that the remains of husband and wife rest together. But where?

Related reading: Aristotle's Understanding of the Chief Good; Getting Acquainted With Aristotle