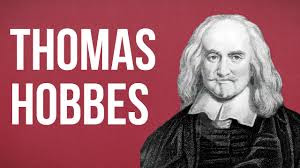 Thomas Hobbes's materialist philosophy is expressed in his most famous book The Leviathan (1651). Here we read, "The universe is corporeal; all that is real is material, and what is not material is not real."

Our knowledge comes from our senses and since the sense can be fooled, even this must be questioned. He rejects Descartes' mind-matter dualism, but he agrees with Descartes that the human mind can analyse experience and achieve a rational and scientific knowledge.

Despite his "indestructible cheerfulness" (Quinton), Hobbes' materialist philosophy eschews metaphysical grounds for hope. He does not believe in a personal God or that the Creator has established natural boundaries by which the ruler and the wise might discern justice and morality. His pessimism about human nature likely resulted from childhood experiences. His father was the vicar of a local parish, and in the wake of a scandal precipitated by brawling outside his church, the disgraced vicar disappeared. Hobbes and his two siblings were taken to live with their paternal uncle, a tradesman and alderman, who provided for Hobbes' education.

An excellent student of classical languages by age 14, Hobbes went to study at Magdalen Hall in Oxford. He left Oxford in 1608 and became the private tutor for William Cavendish, the eldest son of Lord Cavendish of Hardwick (known later as the first Earl of Devonshire).

In 1610, Hobbes traveled with William to France, Italy and Germany, where he met other leading scholars of the day, such as Francis Bacon and Ben Jonson. There is no doubt that Hobbes had a brilliant intellect. It is revealed in his development of the social contract theory.

Hobbes often quotes the Bible in his writings. He pays lip service to the idea of God's existence and divine law, but in Anthony Quinton's assessment, he is an atheist. Quinton writes, "Despite occasional polite or cautious references to God he was clearly an atheist." (Bryan Magee, The Great Philosophers, Oxford, p. 106.)

As Martinich pointed out (1995), the term "atheist" was frequently applied to people who believed in God, but not divine providence, or to theists who held beliefs that were inconsistent with the Judeo-Christian conception of God.

At the very least, it can be safely said about Hobbes that he was a pessimist when it came to humans and God alike.

Related reading: Hobbes on the Order of Creation; Did Hobbes Change the Meaning of Justice?