Hobbes on the Order of Creation 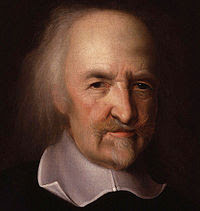 
The English philosopher Thomas Hobbes (1588–1679) was born prematurely on Good Friday. It is said that his birth was precipitated by his mother's fear of the invasion of the Spanish Armada. He lived through the most tumultuous and bloody times in English history and this most certainly contributed to his pessimism about human nature and world events. He was certainly not a Christian, and very probably one of the greatest skeptics of religion in general.

His views have influenced western political ideas in positive and negative ways. The "good" is found in the context of the Enlightenment and Protestant Humanism. Yet Hobbes has had little influence in the East where among the Christian minorities he thought is seen as a dangerous departure from Holy Tradition. In this approach to governance, human societies are blessed by the Creator only to the degree that they correspond with the fixed order visible in creation.

Hobbes' 1651 book Leviathan influenced John Locke and the Founding Fathers of the United States. In Leviathan, Hobbes develops his contractarian political philosophy. He see the Commonwealth as an artificial entity created through contractual agreement between citizens. This artificial entity has no direct reference to the natural order of creation. In other words, Hobbes has exchanged the natural for the un-natural.  Artifices, even those endowed with authority by general agreement, reflect malleable rather than fixed realities. We are on a slippery slope.

Hobbes intention was that citizens should be protected from one another by a strong ruler. Hobbes assumes that man's beast nature requires a strong handler. On this point we find agreement between East and West and between Hobbes and the Bible, which he often quoted in support of his theories. Then we come to the question of reciprocity in Hobbes' thought and we move toward dualism. Husbands and wives are equally responsible for children. Children consent to parental oversight, just as the citizen surrenders certain prerogatives to the ruler in exchange for protective oversight.

By consenting to parental authority the child receives protection, material provision, training, guidance, nurture and perhaps sufficient bounty to make a marriage. In Hobbes’ view, children who are abused by their parents do not owe them consent to governance, as none can be compelled to obey an authority that commands self-injury or endangers without just cause. By this argument, we may conclude that the child’s consent to be governed by his parents is essential to the proper exercise of parental authority.

We find in Hobbes’ view the beginnings of children’s rights. Later Bentham would adapt this principle in his promotion of child and animal rights.

Hobbes wrote that the dominion “over the child should belong to both [mother and father], and he be equally subject to both, which is impossible; for no man can obey two masters… In Commonwealths this controversy is decided by the civil law: and for the most part, but not always, the sentence is in favour of the father, because for the most part Commonwealths have been erected by the fathers.”

By this argument, the child must obey as his first authority the governance that is established for him by civil law. But surely this overthrows the child’s “right” to consent to be governed by the parent. Here we find an inherent contradiction in Hobbes' thought.

By this argument, we further conclude that patriarchy is not a natural order but the artifice of male law makers.

For our purposes, "order of creation" will be defined as the differentiated constituents of Nature which are evident most fundamentally as supplementary opposites (east-west, night-day, female-male, etc.). Using this definition we will avoid the narrow definition which is restricted to the first chapters of Genesis, missing the point that these supplementary opposites frame the whole of the biblical worldview.

For Hobbes, the ideal government is a monarchy perpetuated by rules of succession that keep control within the royal family. He quotes I Samuel 8:11-17 as an authority for his view of monarch’s power over lands, harvests, flocks, populace, militia and all judicature, “in which is contained as absolute power as one man can possibly transfer to another.”

By this argument, we may conclude that not even a prophet of God has authority to question the ruler’s will. The ruler is the supreme authority on earth, usurping even God’s authority. While Hobbes argues that the power of the ruler is established by God on earth, he does not recognize the equally authoritative offices of the prophet and the priest. This being so, he justifies civil authority as superior to ecclesiastical authority and develops a comprehensive Erastianism.

The young Charles II, Hobbes's former pupil, granted him a pension of £100. The king’s protection was important to Hobbes, especially when he was accused of heresy. Terrified of being labeled a “heretic”, Hobbes burned some of his papers and set about to examine the law of heresy. He presented the results of his investigation in three short Dialogues added as an Appendix to his Latin translation of Leviathan. In this appendix, Hobbes argued that, since the Restoration had put down the High Court of Commission, there remained no court of heresy and nothing could be heresy except opposing the Nicene Creed, which, he maintained, Leviathan did not do. This definition of heresy served Hobbes well, but it ignores the question of whether Hobbes’ political views contradict the orders of creation.

Hobbes’ fear of societal chaos convinced him of the necessity of absolute regal powers. He wrote, “And though of so unlimited a power, men may fancy many evil consequences, yet the consequences of the want of it, which is perpetual war of every man against his neighbour, are much worse.”

In Hobbes' view, the validity of a contract depends on the sovereign's power to coerce compliance. It is power that validates covenants. Justice is not a possibility until sovereignty has been created. By this argument, we may conclude that justice is a product of coercive power and cannot exist apart from such. This contradicts the message of Jesus Christ, who emptied Himself and took the form of a servant to demonstrate the nature of true power.


It is Natural for Man to Honor Valid Contracts

In Leviathan, Hobbes develops his third law of nature: that men must honor valid contracts. Were this reality, the only occasion for war and turmoil would be a vacuum of power. Hitler's Third Reich refutes this principle. After concentrating both executive and legislative power in his person, Hitler exercised his power to destroy millions of people and to wage war on two fronts. He regarded coercive power as a necessity in achievement is objectives.


On Judging Good from Evil

Hobbes wrote, “For the cognizance or judicature of good and evil, being forbidden by the name of the fruit of the tree of knowledge, as a trial of Adam’s obedience, the devil to inflame the ambition of the woman... told her that by tasting it they should be as gods, knowing good and evil. Whereupon having both eaten, they did indeed take upon them God’s office, which is judicature of good and evil, but acquired no new ability to distinguish between them aright.”

Hobbes concludes that humans take God's role as judge upon themselves without having God's ability to judge good from evil. Since this is the case, free will must be determined by material, not metaphysical concerns. He wrote, "The universe is corporeal; all that is real is material, and what is not material is not real."

Here Hobbes tosses out the final piece of Christian tradition and prepares the ground for the materialist philosophies of later centuries. He treats freedom as being able to do what one desires and he treats the Creation as mere matter in motion.

Christian Holy Tradition is the single worldview that has power to confront and expose Hobbes' fallacies. It represents an extremely ancient received worldview and worship and prayer forms that assert an absolute authority and an absolute moral obligation whereby good and evil may be judged and failing to judge rightly, the eternal soul may still receive pardon.

Related reading:  Did Hobbes Change the Meaning of Justice?
Posted by Alice C. Linsley at 9:00 AM