Chesterton on Corruption of Truth 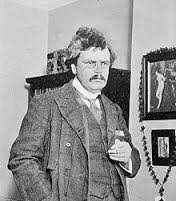 "And it is some satisfaction to realise that we are not living in a nightmare in which No is the same as Yes; that even the modern world has not actually gone mad, with all its ingenious attempts to do so; that two and two do in fact make four; and that the man who has four apples really has more than the man who has three. For some modern metaphysicians and moral philosophers seem disposed to leave us in doubt on these points. It is not the fundamental reason in things that is at fault; it is a particular hitch or falsification, arising from a very recent trick of regarding everything only in relation to trade. Trade is all very well in its way, but Trade has been put in the place of Truth."-- G. K Chesterton

From Reflections on a Rotten Apple