Plato: A Heart Fixed on Reality 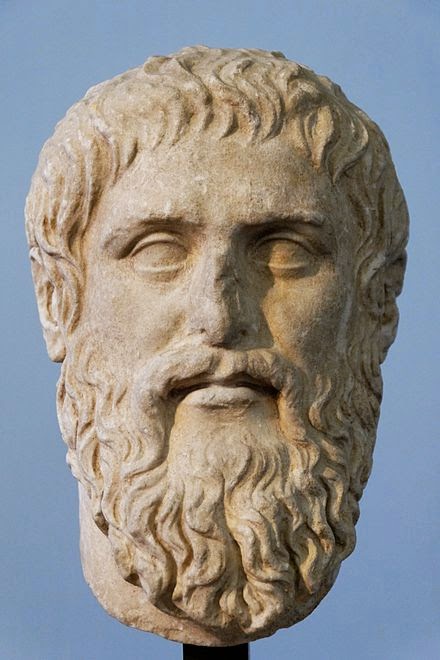 
When the mind's eye rests on objects illuminated by truth and reality, it understands and comprehends them, and functions intelligently; but when it turns to the twilight world of change and decay, it can only form opinions, its vision is confused and its beliefs shifting, and it seems to lack intelligence. (Plato, Republic)


Plato is one of the most penetrating and influential thinkers in the history of philosophy. He is the philosopher who invites us to participate in the "philosophical project" perhaps more than any other philosopher. In this we see the influence of his teacher, Socrates.

Plato's writings present philosophy as a living conversation to which his readers can contribute. His Dialogues are rich in humor, argumentation, and the portrayal of people and events of ancient Athens.

An Athenian citizen of high social rank, Plato's works reveal an active interest in the political events and intellectual movements of his time. His commitment to the "philosophical project" influenced his students and many generations of thinkers who have enjoyed his writings. He left his mark on metaphysics, ethics, politics, and epistemology, and though he and his student Aristotle did not agree on some important matters, Plato's influence of Aristotle is considerable.


Here are samples of Plato's wisdom and wit.

And those whose hearts are fixed on Reality itself deserve the title of Philosophers. (Plato, Republic)


"We are like people looking for something they have in their hands all the time; we're looking in all directions except at the thing we want, which is probably why we haven't found it.'


'That is the story. Do you think there is any way of making them believe it?'

'Not in the first generation', he said, 'but you might succeed with the second and later generations.'

'We will ask the critics to be serious for once, and remind them that it was not so long ago that the Greeks thought - as most of the barbarians still think - that it was shocking and ridiculous for men to be seen naked. When the Cretans, and later the Spartans, first began to take exercise naked, wasn't there plenty of material for the wit of the comedians of the day?'

'But when experience showed them that it was better to strip than wrap themselves up, what reason had proved best ceased to look absurd to the eye. Which shows how idle it is to think anything ridiculous except what is wrong.' (Plato, Republic)


The society we have described can never grow into a reality or see the light of day, and there will be no end to the troubles of states, or indeed, my dear Glaucon, of humanity itself, till philosophers are kings in this world, or till those we now call kings and rulers really and truly become philosophers, and political power and philosophy thus come into the same hands, while the many natures now content to follow either to the exclusion of the other are forcibly debarred from doing so. This is what I have hesitated to say so long, knowing what a paradox it would sound; for it is not easy to see that there is no other road to happiness, either for society or the individual. (Plato, Republic)

Posted by Alice C. Linsley at 6:15 PM No comments:

Email ThisBlogThis!Share to TwitterShare to FacebookShare to Pinterest
Labels: Plato


We Are Dysfunctional Because We Have Forgotten How To Think?


The past few years give one the suspicion that American society is dysfunctional. Our Congress is useless, our institutions inept. Faced with the terror of existence, young men like Adam Lanza react with violence. Faced with manageable problems such as a “fiscal cliff,” our democracy self-destructs. Anger is everywhere; understanding is nowhere.

Although a democratic society cannot function unless its citizens are able to rationally debate one another, rationality is missing from American politics. We assail our political enemies with intractable opinions and self-righteous anger. An ugly bitterness pervades everything. Meanwhile, our country is slowly but surely committing suicide.

It seems to me that this dysfunctional political dialogue, which stems from the iron certainty we grant our opinions, is the most pressing problem confronting 21st century America. In fact, it is a crisis. For without the ability to carry on a useful dialogue, we cannot solve our greatest challenges, or even our smallest ones.

Why philosophy? Because the study of philosophy, the “love of wisdom,” creates and nurtures thoughtful minds, minds that can — as Aristotle suggests — entertain a thought without accepting it. With a philosophic worldview, a Republican who despises any tax increase or economic stimulus could at least consider the notion of tax hikes or Keynesian economics. A Democrat facing antithetical ideas could do likewise. Thought rather than anger could become the default response to opposing worldviews.

Indeed, philosophy can do a great deal to lessen the anger that is growing like a cancerous tumor in modern America. The tools exist in both Eastern and Western thought — in the Stoic exhortation to accept the present as it is, in Buddhist meditation, in the Humanist’s transcendent appeal to reason, in Kant’s categorical imperative. Philosophy can help us inculcate virtue for, in the words of Socrates, “knowledge is virtue.”

While some philosophies obviously conduce toward peace more than others, while some philosophers (Marcus Aurelius) seem kinder than others (Nietzsche), the open-minded study of different philosophies at least opens one up to the possibility that one is wrong. One realizes, like Socrates did, that knowledge is anything but certain, that true wisdom lies in realizing how much one does not know, in understanding that our knowledge of the universe (and therefore of earthly things like politics) is utterly inadequate, perhaps comparable to the area of a pin’s tip against a table. This realization makes one less angry when confronted with opposing views, replacing counterproductive anger with productive curiosity.

Despite the benefits of the philosophic mindset, we do not cultivate this mindset in our children. In fact, philosophy is almost entirely absent from American schools. For example, there is no AP (Advanced Placement) Philosophy course. While some high schoolers may have heard of Socrates, Plato, or Aristotle, most do not truly understand their philosophies — much less the philosophies of men like Descartes, Schopenhauer, or Nietzsche. This is shameful, because a person who does not understand the history of thought does not understand the rationality behind our political system.

The first time I read a philosopher was not until my first semester of college. My professor assigned Plato’s Republic, and while at first I (admittedly) did not understand anything, eventually I became absolutely enamored with this incredible man. Here was a person who had thought about so many of the same things I had, albeit thousands of years ago and with much more sophistication than I could ever muster. What is justice? What is truth? Why do people suffer? Is there an afterlife? These are the questions that children ask their parents, the questions that scare us most, and perhaps because of this fear we do not consider them when we grow up.

I think this is a great mistake. We should consider these questions. For by reading philosophy, I became less frightened of them. I no longer shirked away from contemplating death (thanks Epicurus) or morality (thanks Kant) or misfortune (thanks Epictetus). More, I realized that anger — in both politics and everyday life — is largely a reaction to fear, and that this fear can be lessened exponentially through the sort of reflection philosophy fosters.

I don’t know why philosophy isn’t taught in high school. Perhaps the subject seems too esoteric or pretentious. Perhaps there is a fear that philosophy could encroach on the sort of questions religion purports to answer — “how should one live,” “how should one die,” and so on. Some parents may feel uncomfortable with the idea of their children receiving answers to “the big questions” from Socrates and Plato as well as from Jesus and Paul.

This fear is unfounded. In general, philosophy does not squander religion; it merely exhorts one to understand the world by opening one’s mind. It encourages one to consider multiple possibilities (unlike our politicians), only accepting the possibility that appeals to one’s innate sense of reason. In a diseased society that is filled with so much anger and bitterness — indeed, with so much madness — we could do worse than expose our children to philosophy. In fact, such exposure would teach our children to react to problems with an inquisitive rather than angry mind — a concept that the children in Congress have not yet grasped.

To those who say philosophy is impractical (and thus that learning how to think is impractical) I say: nonsense. Our society is dysfunctional because we have forgotten how to think, if we ever truly knew how to think at all. Although we as a society believe we are in possession of all truth, we are not. To study philosophy is to learn how woefully ignorant we are, and this knowledge can perhaps teach us humility, can perhaps suggest to us that the other side may have some value after all.

So my point is this: Our diseased political system is in dire need of a hefty dose of philosophy, and the best way to inject this dose into American society is to start at the stem — to raise our children to have a philosophic mindset by teaching philosophy in schools. In the process we will, slowly but surely, be raising Americans who possess the capacity to respond to problems with inquisitive rather than angry minds, perhaps ending this suicidal gridlock.

I hope it is not too late.

Posted by Alice C. Linsley at 8:51 AM No comments:

Email ThisBlogThis!Share to TwitterShare to FacebookShare to Pinterest
Labels: philosophy

Philosophy Should be Taught with STEM


“Whatever happened to the recognition that a university education has at least three purposes: helping one understand who they are and what excites and motivates them; helping understand one’s relationship to the greater world; and, also, becoming prepared for a job.” –Bernie Machen, University of Florida

“It is clear that to thrive in a society where they may have up to six different careers, business and STEM graduates need also to be curious and creative, to be critical thinkers and good communicators.” –Jim Barker, Clemson University

“The failure to incorporate studies in the liberal arts and humanities, along with STEM education, will deprive the next generation of students the critical thinking skills and context necessary to address the challenges they will face in the future.” –Charles Steger, Virginia Polytechnic Institute

“Employers send a consistent message about what they look for in a college-educated employee: the ability to write clearly, speak persuasively, analyze data effectively, work in diverse groups, and understand the competitive global knowledge environment.

“These characteristics are all nurtured and tested in a purposeful liberal arts education.” –Kevin Reilly, University of Wisconsin

Posted by Alice C. Linsley at 3:22 PM No comments: