Dreyfus on Metaphysics and Phenomenology

Hubert Lederer Dreyfus is an American philosopher and professor of philosophy at the University of California, Berkeley. His interests include phenomenology, existentialism and the philosophy of both psychology and literature, as well as the philosophical implications of artificial intelligence.

Dreyfus is especially known for his exegesis of Martin Heidegger. Dreyfus considers Heidegger's Being and Time (Sein und zeit) to be one of the most important philosophical works of the twentieth century. It is both a systematization of the existential insights of Kierkegaard and Nietzsche and a radicalization of Husserl's phenomenological account of intentionality. What results is an original interpretation of the human condition leading to an account of the nature and limitations of philosophical and scientific theory. This account has important implications for psychology, anthropology and sociology.

Here is an interview with Hubert Dreyfus on Metaphysics and Phenomenology.


Related reading: The Story of Ontology; Crash Course on Phenomenology

Posted by Alice C. Linsley at 1:07 PM No comments:

Watch this excellent presentation on Heidegger by the Glasgow philosophical theologian George Pattison.
Posted by Alice C. Linsley at 12:36 PM No comments:

The Meeting of the Great Minds - Spring 2015 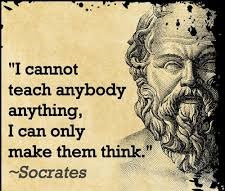 This semester my philosophy students will explore ontology, logic, and ethics. It will be a busy semester! We will have between 3-5 meetings of the great minds. You will discuss questions posed to the forum by Socrates. Three questions are asked each meeting.

Your final paper for the semester will be about the philosopher you have portrayed in the forums.

Philosophers you may select for the Spring Semester include, but are not limited to: