Ayn Rand watched her family suffer the loss of everything under Stalin and this shaped her political views for the rest of her life. She hated the repression of Russian dissidents, many of whom were clergy, yet she fully embraced atheism. She hung out with Hollywood people and believed that you had to write on the edge, be advant-garde, to get attention. She hated government intrusion in personal affairs, yet she testified against Hollywood communists before the U.S. Senate. She hated logical fallacies, like ad hominem, yet she used it liberally against those she disliked.

Rand (1905-1985) was born in St. Petersburg, Russia. At age six she taught herself to read and at the age of nine, she decided to make fiction writing her career. She was opposed to the mysticism and collectivism of Russian culture.

During her high school years, she witnessed the Kerensky Revolution, which she supported, and the Bolshevik Revolution, which she denounced. In order to escape the fighting, her family went to the Crimea. After the Communist victory her father's pharmacy was confiscated and her family faced periods of near-starvation. When introduced to American history in her last year of high school, she took America as her model of what a nation of free citizens could be.

She entered the University of Petrograd to study philosophy and history and graduated in 1924. She experienced the takeover of the university by communist thugs. She entered the State Institute for Cinema Arts in 1924 to study screenwriting, something that would serve her well after her arrival in the United States. She had booklets on actress Pola Negri (1925) and “Hollywood: American Movie City” (1926) published. Both were reprinted in 1999 in Russian Writings on Hollywood.

In February 1926 Rand left Soviet Russia for a visit to relatives in Chicago. Although she told Soviet authorities that her visit would be short, she was determined never to return to Russia. She spent the next six months in Chicago, obtained an extension to her visa, and then left for Hollywood to pursue a career as a screenwriter.

On Ayn Rand’s second day in Hollywood, Cecil B. DeMille saw her standing at the gate of his studio, offered her a ride to the set of his movie The King of Kings, and gave her a job, first as an extra, then as a script reader. During the next week at the studio, she met an actor, Frank O’Connor, whom she married in 1929; they were married until his death fifty years later. 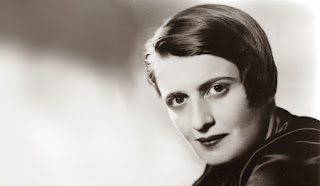 Her novels include We the Living (1936), The Fountainhead (1943) and Atlas Shrugged (1957), Rand's last work of fiction. In her work she dramatized her philosophy in an intellectual mystery that integrated ethics, metaphysics, epistemology, politics, and economics. She also wrote a numbe of shorter pieces including The Husband I Bought (1926); The Night King (1926); Her Second Career (1929) and Red Pawn (1931-32).

Rand wrote and lectured on her philosophy Objectivism, which she characterized as “a philosophy for living on earth." She died in 1982 in her New York City apartment.

About C.S. Lewis, Rand wrote, "This is really an old fool – and nothing more!" Her ad hominem attack was not a reaction to Lewis the man, who she had never met. Rand hated his Christian apologetics.

"Government 'help' to business is just as disastrous as government persecution... the only way a government can be of service to national prosperity is by keeping its hands off."

"Every aspect of Western culture needs a new code of ethics - a rational ethics - as a precondition of rebirth."

"Every man builds his world in his own image. He has the power to choose, but no power to escape the necessity of choice."

"God... a being whose only definition is that he is beyond man's power to conceive."