Is "Complementarianism" a Biblical Concept? 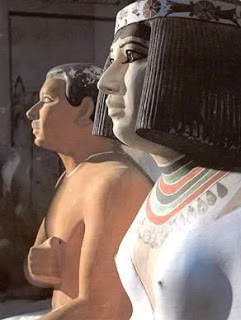 The king is shown with Sun-darkened skin. His queen appears with Moon-whitened skin.
This expresses the gender distinctions and binary reasoning of the Nilotic Hebrew.

Among Evangelicals the roles of males and females are prescribed by a doctrine called "complementarianism." This belief maintains that God created men and women equal in dignity and personhood, yet different and serving complementary roles in Church, Home, and Society. The male is the head of the home and the lead authority in the Church.

Except this is not true. In the order of creation women cannot impregnate with sperm. Men cannot conceive and give birth. When it comes to reproductive processes, there is mutual dependence, but no equivalent function.

To impose egalitarianism on the canonical Scriptures is to distort the biblical view of the order of creation which denies dualism. The yin-yang may be equal and inseparable entities in Asian thought, but in biblical thought one entity of a binary set is always observably superior in some way to its partner. This is expressed in statements of the obvious. In the binary set of Sun-Moon, the Sun is the greater light (Gen. 1:16). The light of the Moon is refulgent. The male is larger and stronger than the female.

Is complementarianism the same as the binary view of Scripture?

It cannot be the same because Evangelicals omit an important feature of the binary worldview: the unique contribution of the Virgin Mary as the mother of Jesus the God-Man. Unless she be venerated (not worshipped) the binary balance of Righteous Manhood and Righteous Womanhood is absent. Why is Mary declared the most blessed among women? Because she did what only a woman could do. She brought forth the God-Man! Mary shines with the refulgent brightness of her son, Jesus Messiah.

Archaeological, anthropological, and linguistic research provides many examples of the binary reasoning of the early Hebrew from whom we received the Messianic faith we call "Christianity." This reasoning extends to the metaphysical: Life is greater than death. However, it does not apply to the Godhead which is uncreated.

The God-Man would not be considered a binary set in the biblical sense because 1. this is unique, 2. in Christ these are of one being/substance/essence, 3. in Christ the Man has been made God, 4 in Christ God has been made Man. So the mystery of the Trinity does not meet the requirement that one entity of the set be superior to the other in an observable way.

Binary reasoning in the Bible pertains to the order of creation and the God-Man is not created.

The bishops, priests, and deacons who came together at the early ecumenical councils struggled with the created-uncreated distinction, and after more than one difficult and costly convocation, began to resolve the Christological and Trinitarian questions.

Until the Anglicans recognize the unique nature of the priesthood as a divine ordinance which began with the biblical Hebrew, the question of women's ordination will not be resolved to anyone's satisfaction. The Evangelical approach is to speak of the priesthood as a generalized "pastoral ministry." This obfuscates the historic nature of the priesthood as being about the Blood. It comes close to denying the blood work of the Cross. Among the biblical Hebrew, blood work was observed as binary: the bloodwork of males and the blood work of females. The first involved war, hunting, and animal sacrifice. The second involved reproductive processes. That is why women were never priests. The two bloods could not be present in the same locale.

Related reading: The Athanasian Creed; The Binary Distinctions of the Horite Hebrew; Binary is a Bad Word These Days; Why Women Were Never Priests; Blood and Binary Distinctions; Rethinking Gender Equality; What Christians May Safely Disbelieve
Posted by Alice C. Linsley at 1:32 PM No comments: