Sartre and Camus on Politics 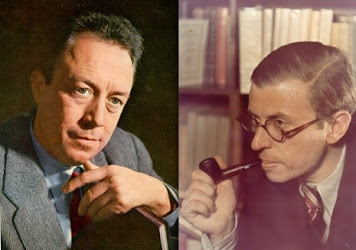 Camus and Sartre
Albert Camus (1913-1960) was born into poverty in Mondovi, Algeria. Jean-Paul Sartre (1905-1980) was reared in high French society. They met in Paris during the Nazi Occupation and became close friends after the War. As Europe began to rebuild, they became prominent political voices.
The two Existentialists were pursued by reporters and often quoted. Their eventual falling out received a great deal of media attention.
As Sam Dresser notes, "Readers looked to Sartre and Camus to articulate what that new world might look like."
"We were," Simone de Beauvoir observed, "to provide the postwar era with its ideology."
Both men believed that the workers were oppressed and that new political systems were needed to liberate them from poverty. Camus leaned toward Socialism and Sartre favored Communism. In Paris, Camus wrote editorials for the underground Resistance journal Combat, to which Sartre contributed articles.
In October 1951, Camus published The Rebel in which he articulated his idea of freedom as a process of constant non-violent re-balancing. He wrote, "Absolute freedom is the right of the strongest to dominate," while "absolute justice is achieved by the suppression of all contradiction: therefore it destroys freedom." The conflict between justice and freedom required political moderation, and acceptance of the limitations of our humanity. Camus recognized that institutionalized political bodies must impose authoritarian actions, and all one can do is shout, No!
Concerning his ideology of the French Resistance: “If we have a doctrine to formulate,” Camus wrote in a 1943 letter, “it would be one of a balance of justice and of liberty, certainly difficult to realize, but outside of which nothing can be done.”
The Rebel declared Camus' preference for a peaceful socialism. The news from the USSR appalled him. Under Soviet Communism there was no freedom at all. Sartre reported that Camus "hated Communism."

Sartre disliked Camus' approach considering it "bad faith." He felt that Communism was the best system to address the dehumanizing effects of poverty, and he was prepared to endorse violence. Sartre continued to advocate Communism until 1956, when the Soviet tanks rolled into Budapest and brutally crushed the Hungarian freedom movement. Thousands were killed and wounded and nearly a quarter-million Hungarians fled their homeland.

Though Sartre distanced himself from Soviet style Communism, he never abandoned the idea that revolutionary violence might be warranted. His commitment to violent overthrow of unjust systems became acute after the 1968 May-June student riots in France. Well into his advanced years he participated in Leftist marches, some of which turned violent. He is described by Agnès Poirier as having the "sparkle of the perpetually angry man."
Doubtless, his 1940 captivity in a Fascist prison camp colored Sartre's world. Sartre described his experience in an interview with a family friend John Gerassi. He said, "The Germans were the elite. The fascistoid prisoners were the enforcers of the elite. And the rest of us, the exploited who could only surpass the feeling of exploitation by bonding together." (J. Gerassi, Talking With Sartre: Conversations and Debates, Yale University Press, 2009, p. 105)
Related reading: How Camus and Sartre split up over how to be free; A Lost Wartime Letter From Albert Camus; INDEX of Topics at Ethics Forum
Posted by Alice C. Linsley at 12:35 PM 1 comment: