In a sense, Dasein is the philosophical troll under the bridge that makes us fear crossing, lest we have an encounter.

In our study of ontology, we have investigated Martin Heidegger's early thought and attempted to understand his contribution to the philosophical project. As with all contributions to the philosophical project, he builds on the work of others, especially Aristotle and Husserl, and he reacts against the work of other philosophers, namely Descartes. Heidegger's replacement for terms such as subject, object, consciousness, and world is "Being-in-the-world", a term he created to avoid the subject-object (mind-body; extended-not extended) discourse that had dominated Western philosophy. He also exposed the weaknesses in Husserl's approach to consciousness.

Heidegger's Being and Time (Sein und zeit) is one of the most important philosophical works of the twentieth century. It is both a systematization of the existential insights of Kierkegaard and Nietzsche and a radicalization of Husserl's phenomenological account of intentionality. It is an original interpretation of the human condition expressed through Heidegger's unique use of terms. Because of the challenging vocabulary, Being and Time is one of the most difficult books to read. The fact that we are reading an English translation of a work written originally in German adds to the challenge.

Being and Time represents Heidegger's attempt at Destruktion of the Cartesian tradition that he believed was "ossified" - a rigid fossil. Or perhaps the Cartesian tradition is a stagnant pond covered with a film of algae so that everything important is hidden. That is how I would express Heidegger's concern, but by using this analogy, I run the risk of reimposing the very subject-object discourse that Heidegger sought to get beyond. I (subject) observe the pond scum (object). We can move away from this a few steps by speaking instead of Dasein's consciousness of water concealed by something. My awareness of the water is not based on my observation of the water, but on my prior experience that a pond holds water and algae grows on the surface of the water. There is something prior, as Heidegger notes in his understanding of being-in-the world. He has oriented ontology to Dasein rather than to objects. However, one must wonder how far we can move from the subject-object/mind-body discourse. (We do keep coming back to this binary feature, to merisms. In telling the story of ontology, we cannot escape it. Think Mobius strip: two edges, a single, indivisible unit.)

As we wrap up our study of Heidegger, it is helpful to review some of the neologisms that appear in Being and Time to see how Heidegger employs them.

Attunement: Mood, neither knowledge nor contemplation. It is like background music that compels us to act according to the beat. Mood is the background of discourse in which we are already engaged and are expressing in our situation. Attunement arises from being-in-the-world. A mood manifests how one is and how one is faring; having a mood signals attachment (concern/care) to Dasein. Mood is why "being there" matters.

Being-in-the world: the basic and inescapable state of Dasein

Dasein: Human existence; "being there" in the sense of daily existence; being with
When a particular Dasein talks about its Being, it is as the self-evident "my Being". Dasein has two modes: authentic and inauthentic. Inauthenticity is expressed when Dasein flees in the face of its Being, its search for one's possibilities of Being; that is of not facing up to and acknowledging the meaning of one's existence. Authenticity requires facing the reality of our extinction/negation and coming to grips with the anxiety posed by our mortality. In a sense, Dasein is the philosophical troll under the bridge that makes us fear crossing, lest we have an encounter.

Discourse: The articulation of the situation in which we currently find ourselves. The manifestation of our everyday existence. Called "uncovering" by Aristotle. Discourse in not simply articulation of Dasein's situation. It is also being-in-the world.

Clearing:  Heidegger uses the German word Lichtung, which relates to a clearing, as in a clearing in the woods. Since its root is the German word for light (Licht), it is sometimes also translated as "lighting," and refers to the necessity of a clearing in which anything at all can appear, the clearing in which some thing or idea can show itself, or be unconcealed. Hubert Dreyfus writes, "things show up in the light of our understanding of being." ( Being-in-the-World. Cambridge: MIT Press, 1995. p. 163)

In the Eucharist, when the consecrated bread is broken in half and the two sides set apart, there is a clearing made for those who come to receive Christ.

Ontic:  Heidegger often uses the term ontic in contrast to the term ontological. Ontological pertains to existence in general, whereas ontic is descriptive of a the plain facts of an entity's existence. What is ontic is what makes something what it is.

Present-to-hand:  There are three kinds of presence-at-hand:
Ready-to-hand:  Dasein's use of equipment, like a hammer, and our discovery or (uncovering) of the hammer's equipmentality. An object in the world with which we have meaningful dealings.

Towards-which: What our activity is directed toward, the goal of an action; for the sake of

Unheimlich : not being at home, unsettledness, existential groundlessness

Posted by Alice C. Linsley at 1:23 PM No comments:

Email ThisBlogThis!Share to TwitterShare to FacebookShare to Pinterest
Labels: Being and Time, Heidegger

Wise Women Throughout the Ages 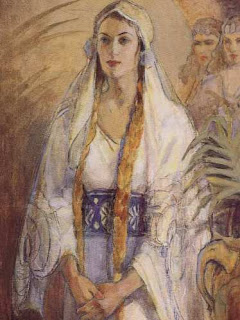 For many female philosophers there is little textual evidence for their philosophical work. Hypatia and Theistoclea are examples. Much speculation surrounds them. Were they philosophers, prophets or priestesses?


They certainly were not priests in the sense that they offered blood sacrifices. The famous women of the Greek and Alexandrian temples did not. Rather, these were seers and "wise women." Diogenes calls Themistoclea a "priestess" while describing her as a philosopher.

Theistoclea was the Pythia of Apollo at the Delphi temple in the 6th century B.C. She was reputed to be wise in math, natural science, medicine and philosophy. She was one of Pythagoras' teachers. Diogenes stated that "Aristoxenus asserts that Pythagoras derived the greater part of his ethical doctrines from Themistoclea, the priestess at Delphi."

Themistoclea has a later parallel in Hypatia who was at the Temple of Serapis in Alexandria. The Church Father Tertullian wrote in AD 197 that the temple housed a great library which contained the Old Testament in Greek (Septuagint). Hypatia was the daughter of the famous mathematician Theon Alexandricus (AD 335-405). Like Themistoclea, she too was a mathematician as well as an astronomer and philosopher.

Around AD 400, Hypatia became the head of the Platonist school at Alexandria. She imparted knowledge to people who came to Alexandria to study. One of her students, Synesius of Cyrene, became bishop of Ptolemais in AD 410. He was an exponent of the doctrine of the Holy Trinity.

In the Judeo-Christian tradition, women have been acknowledged as fountains of wisdom. Deborah served as judge over the people of Israel. Huldah of Jerusalem was consulted by the King's advisers. She is mentioned in 2 Kings 22:14–20 and 2 Chronicles 34:22–28. According to Jewish tradition, she was one of the "seven prophetesses", with Sarah, Miriam, Deborah, Hannah, Abigail, and Esther.

A Judean queen named Salome Alexandra ruled from 76-67 BC. She was one of two women to exercise sole rule over Judea. Archaeologists have uncovered her palace in Jericho. Salome is the only woman mentioned in the Dead Sea Scrolls. Some of the religious reforms that shaped second-Temple Judaism were implemented under her rule. Her reign is viewed as a golden age in the Talmud. Queen Salome Alexandra was so admired that generations of mothers named their daughters "Salome" in her honor.

Peter Adamson, Professor of Late Ancient and Arabic Philosophy at Ludwig Maximilians Universität, has written an interesting piece about women philosophers in which he explores the role of wise women in the ancient world and in Christianity. Here is an excerpt:


The place of women in ancient philosophy looks rather different, though, if we turn our attention to late antiquity. Especially among Christian authors, we have texts by men that present women as full-blown philosophers, without implicitly tying these women to household tasks.

The two best examples of this are Augustine, writing in Latin around the turn of the 5th century AD, and Gregory of Nyssa, writing in Greek a generation or two earlier. Both of them exalted female members of their immediate family for their wisdom. In Augustine’s case this was Monica, whose patient and pious influence helped bring him to Christianity, and who appears as an interlocutor in the philosophical dialogues that are among Augustine’s earliest works.

But it is Gregory of Nyssa who gives us the most remarkable yet little-known portrayal of a female philosopher from all of Greek and Roman antiquity.

Posted by Alice C. Linsley at 9:44 AM No comments:

Christianity and Evolving Worldviews in the West 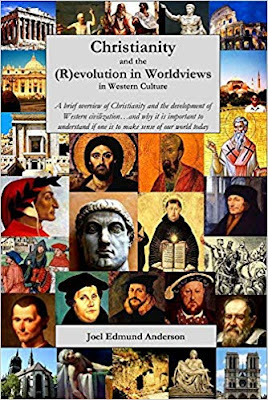 The author is Joel Edmund Anderson who grew up in the suburbs of Chicago. Teaching has taken him to many places in the U.S. and around the globe. He spent 16 years teaching English and Bible in various high schools, and is now an adjunct professor in college. He has a BS.Ed. in English, a M.A. in Theological Studies, a M.A. in the Old Testament, and a PhD in the Old Testament.

His book Christianity and the (R)evolution of Worldviews in Western Culture was reviewed by Sy Garte, a former Division Director at the National Institutes of Health (NIH):

This is a delightfully written and comprehensive but also highly accessible treatise on philosophical ideas regarding Christianity and religious faith and the historical contexts in which they arose. Anderson covers pretty much all the main threads in Western philosophy and historical viewpoints, going back to ancient Greece. His chapters on the “so-called” Enlightenment and the 19th century contain valuable insights into the origins of many of our modern ideas about the place of religion and Christianity in particular.

I found the descriptions of the major philosophical views and their authors to be refreshingly candid, highly readable, and engaging. If you (like me) tend to fall asleep at the mere mention of the name Kant or Hegel, this book is for you. Not only is the writing clear and jargon-free, but the essences of the ideas are presented in a way that allows for easy understanding of often difficult concepts. The book also goes into scientific history and the relationship of science with the historical and philosophical trends in Europe.

This is a book for everyone, especially those who are looking for an accurate and insightful depiction of how our worldviews emerged from the thinking of the best and brightest philosophers throughout the ages.