We Should Read "Pagan" Writings 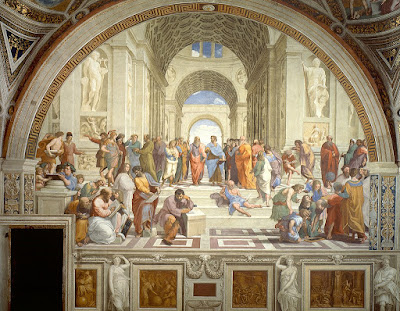 Jason Baxter explores how the treasures of old writings can illumine the banality of our time.

At the end of each semester, I inevitably have one or two well-meaning students who are still unsure why they were asked to devote so much time and care to reading, annotating, and discussing archaic Greek literature. They enjoyed reading Homer. They liked our conversations in class, but, at the end of the course, lacking theoretical reasons, they still worry about why they spent so much time on pagan, non-Christian authors. Over the past few semesters, I have thought about how to best answer that question: Why read old (pagan) books? To do so, I would like to begin with an image from a myth.

At the beginning of his Timaeus, Plato retells the well-known myth of Atlantis. There was, once upon a time, a flourishing civilization, which excelled in the arts and sciences. They built a beautiful city, which blended perfectly into its natural environs. But one day, the city was lost. An earthquake caused it to be buried under an ocean of water. And there, at the floor of the ocean, this magnificent civilization rests, in silence.

I like the image of the luxuriously wealthy city at the bottom of the ocean because the metaphor of archaeology brilliantly captures the goals of a student of the humanities. What if, along with the physical ruins of buildings, there were certain ideas, certain ways of life, certain ways of thinking which have been buried under the rubble of time? What if some truth from antiquity, which used to be obvious to everyone else, had only begun to seem bizarre to modern man? As everyone knows, Hesiod’s Theogony is a very bizarre piece of writing by our standards. But what if the truth is, it is not so much this book which is weird, but we who have become strange? What if we moderns are the ones out of step with everyone else, not the ancients who are backwards and behind the times, but we who are out of tune? It is for this reason, with these questions in mind, that I encourage my students, every time they bump into a passage (or book) particularly strange and bizarre, to slow down, re-read, and think more deeply. You might have hit a cultural blind spot.

Posted by Alice C. Linsley at 9:16 AM No comments: