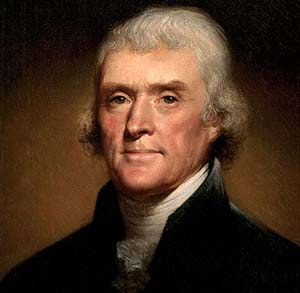 "Thomas Jefferson is a kind of incarnate compendium of the Enlightenment. His remarkable openness to its spirit is the philosophical counterpart to his political sensitivity in making himself “a passive auditor of the opinions of others,” so as to catch the “harmonizing sentiments of the day” and to incorporate them into a document that would be “an expression of the American mind,” the Declaration of Independence…"


Was Thomas Jefferson a philosopher? If so, in what sense? I can imagine two opposing questions raised in rejoinder.

He was a statesman—why should we expect or require him to be a philosopher also?

He read and reasoned and wrote throughout his life—why should we hesitate to give him the title?

The first question presupposes that there are indeed two kinds of life, readily distinguishable and mutually exclusive: namely, Aristotle’s two lives of excellence—the one practical and political, and the other theoretical and philosophical (Politics 1324a, Nicomachean Ethics 1095b). The good pursued in the former, which is honor, depends on incurring the esteem of others; that of the latter, the pure and permanent pleasure of contemplation, is self-sufficient and leisurely.

Posted by Alice C. Linsley at 7:56 PM No comments: