The Question of Immortality 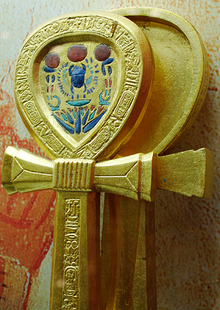 Egyptian mirror case
Mirrors in ancient Egypt had the same shape as the ankh, the symbol of life.

"Death is the dark backing that a mirror needs if we are able to see anything."-- Saul Bellow

"For now we see only a reflection as in a mirror; then we shall see face to face. Now I know in part; then I shall know fully, even as I am fully known."-- the Apostle Paul (1 Corinthians 13:12)

More than 30 years of anthropological investigation of the Horite Habiru (Hebrew) has led me to the conclusion that Messianic expectation is expressed in the burial practices of Abraham's Nilo-Saharan ancestors who believed in bodily resurrection and anticipated a Righteous Ruler who would overcome death and lead His people to immortality. This view of immortality involves the body in resurrected form. For the Horite Hebrew a disembodied soul represented a second death.

The word Sheol is likely derived from the ancient Egyptian word Sheut (šwt), meaning shadow. The Egyptians believed that something of the dead person continues as a shadow beyond the grave, but this is not immortality. For the Nilotic peoples, immortality involved resurrection from the dead, and specifically the resurrection of the divine ruler. Embalming of royal mummies was a science as early as 2800 BC. Reference to a Righteous Ruler-Priest who would overcome death and lead his people to immortality is found in the Pyramid Texts (2400 BC) and in the Coffin Texts (2100 BC). These texts express the desire of the people to share in the immortality of the risen Righteous Ruler. He represented the people as a whole so great pains were taken to bury the ruler in hopes that he might be the one to rise with the Sun, the Creator's emblem. Being raised to life this royal person was expected to make intercessions for the people.

The ancient Egyptians considered the blessed dead “the living ones.” In pre-dynastic times and in the earliest dynasties the people were believed to follow their deified ruler from this world to the next. Their immortality depended on that of their ruler. The ruler was to be righteous, circumcised, and undefiled by contact with blood or corpses. This is why the Nilotic rulers were attended by purification priests.

As Augustine noted, "the Egyptians alone believe in the resurrection, as they carefully preserved their dead bodies." (Jon Davies, "Death, burial, and rebirth in the religions of antiquity", Routledge, 1999, p. 27). Royal tombs were built at the Horite Habiru shrine city of Nekhen before the first Egyptian Dynasty. The oldest section of Nekhen dates to about 4,000 B.C. At Nekhen, Proto-Saharan nobles were buried with red ocher, a symbol of blood. Life is in the blood. Burial of rulers in red ochre is virtually universal between 45,000 and 5,000 years ago.

It was believed that the mummification of rulers would preserve the unity of the body and the spirit which might become separated at death. The second death meant not becoming an "akh" and only as an akh could one enjoy the resurrection life. The ankh for the ancient Egyptians was the hieroglyphic sign of life. It is symbolic of the Sun's daily course, the solar arc. By prayers and sacrifices, the priests of old attempted to keep the KaBa together, preparing the ruler to receive the resurrection at some future time. The resurrection was pictured as a royal procession from the tomb. The procession to the ruler's tomb on the day of burial would be continued beyond the grave at the deified ruler's resurrection. This Horite Hebrew tradition stands behind Paul’s description of Jesus Christ leading captives from the grave to immortality: "When he ascended on high, he led captives in his train and gave gifts to men." (Ephesians 4:8) The same conception is found in Psalm 68:18: "When you ascended on high, you led captives in your train..."

Imagine how speculation might have arisen surrounding the burial of the most righteous rulers. Will this be the one to rise again?  This understanding of immortality is central to Messianic expectation which speaks of a third day rising with the Sun. He rises with healing in His wings, an allusion to Horus as the red-cloaked falcon soaring above the Sun as it makes its westward journey.

Consider how Horus, the archetype of Christ, describes himself in the Coffin texts (passage 148):

"I am Horus, the great Falcon upon the ramparts of the house of him of the hidden name. My flight has reached the horizon. I have passed by the gods of Nut. I have gone further than the gods of old. Even the most ancient bird could not equal my very first flight. I have removed my place beyond the powers of Set, the foe of my father Osiris. No other god could do what I have done. I have brought the ways of eternity to the twilight of the morning. I am unique in my flight. My wrath will be turned against the enemy of my father Osiris and I will put him beneath my feet in my name of 'Red Cloak'." (Myth and Symbol in Ancient Egypt by R.T. Rundle Clark, p. 216)


Psalm 110:1, a messianic reference written about 1000 years later, draws on this received tradition: "The Lord says to my Lord: 'Sit at My right hand until I make Your enemies a footstool for Your feet."
Messianic expectation originated among Abraham's Nilotic ruler-priest ancestors long before Judaism emerged as a world religion. Horites believed that a deified son would die and rise again; that he would embody kindness and unite the peoples. This is why the Bible scholar Frank Moore Cross cannot avoid the conclusion that the God of Israel is the God of the Horites.