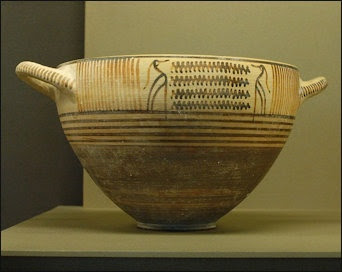 An 8th century Corinthian skyphos (wine-drinking cup).
"A careful reading of the Symposium reveals that Plato’s comparison of Socrates with the Satyrs relies exactly on the discrepancy between appearances and essence."


In this piece I discuss Plato’s description of Socrates’ philosophical inspiration as “drunkenness” and/or Dionysian mania; Plato’s metaphor draws on earlier Greek poetry, including Euripides and his popular play The Bacchants, where Dionysus is praised as the inventor of “liquid drink of the grape” (line 279).

Importantly, Plato also draws on Solon, the famous lawgiver and poet of archaic Athens, who discussed extensively the drinking etiquette of ancient communities as a reflection of their civic character. Yet, the application of this metaphor on Socrates and his philosophical genius was fraught with difficulties since Socrates, known for conversing with the so-called daimonion, the inner voice or sign that guided him, and frequently undergoing trances in public, could be easily misunderstood as a common drunkard or even a madman — especially since wine abuse was also believed to cause madness.

To avoid the risk of contributing to the misperceptions of the Athenians about Socrates, Plato insisted that Socratic ecstasy is utterly sober (even though it can involve wine-drinking and may occur in a sympotic context). Drunkenness is a culturally embedded comparison that allowed Plato to articulate the mind-altering abilities of philosophy while offering a concrete example of how to prepare ourselves for that kind of philosophical revelation. Furthermore, Plato defends the valuable contribution of “drunken” or inspired philosophers and their insights to the city.
Read it all here.
Related reading: Wine Use in Antiquity; Two Passovers and Two Drunken Fathers; Wine Drinking and Alcoholic Drinks in Ancient Greece
Posted by Alice C. Linsley at 12:54 PM No comments: